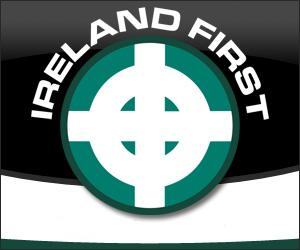 "We at IrelandFirst take heed of the words of our fore-bearers, taking the national and racial ideal of Gaelicism that was put forth by Tone, and then taken to with such heart and selflessness by so many after him. We will do our part in helping to build that new Man, the new Gael. We put aside all petty differences of religion, class and sex. That Gael will spring from the womb of fair Ériu once more; bathing himself in the soothing amniotic wisdom of our timeless tradition – yet he will be a man fit and unafraid of a new world, a new time in which he will be the builder. He will be revived and walk once again in the vigour of youth. Death becomes but a cleanser to him, as important as bodily life. He will disdain any notion of “preservationism” – for it is a wretched thing to be so infinitely preserved that old age becomes a distressful and an aching thing.

We will be rekindled at that sacred fount of Gaelicism, like so many who came before us. Our Empire is of an entirely distinct nature to the current modern-dementia, why do ‘Irish nationalists’ turn to the monstrosity, when all the change that must happen must come from within. The situation at hand, the state of the Nation and its demise cannot be reversed; nor should we want (if we were even capable) to halt the unstoppable. This system is hostile and ruled by masters entirely at odds with ourselves. It must be allowed to fall as it will do. The Nation resides now in the inner capacity of the few, that small number who are the Noble Gaels. From this elite, are the progenitors of the great rebirth of civilisation."